Puma streets ahead in game of environmental Monopoly 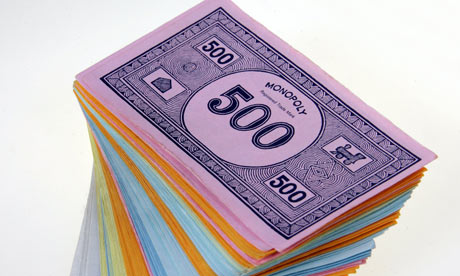 A sound business sense has been applied by Puma to the game of environmental Monopoly. Photograph: Joe Pepler / Rex Features
How much does business really cost the planet? It’s the CSR million-dollar question and this week one fashion sports brand has come closer than any other big corporation to giving a definitive answer.
Arguably, it was the Stern review in 2006 that made the business world sit up and start doing some serious number-crunching on its environmental impact. By showing the economic effects of climate change, the review spoke to business in a language it could understand, leveraging the case for the “triple bottom line” conceived by John Elkington in the mid 90s.
Since then, the quandary of how to balance the three key indicators of people, planet and profit has taxed social entrepreneurs and CSR teams around the world and, no doubt, instigated countless boardroom brawls. The problem is that profit is easily quantifiable, the other two “p”s much less so. Until now.
This month Puma, the sports brand, became the first major global business to put a price on the impact it was having on the environment. The company announced that its greenhouse gas emissions and water consumption last year cost an equivalent of £82.8m, based on £57 per tonne of CO2 and £0.69 per m3 of water. In context, this represents around 12% of its total annual sales of £670m.
The figures, derived from an accounting system designed with PricewaterhouseCoopers and Trucost have created a stir among the business world and given Puma a huge lead against its competitors on the CSR track.
Being the first to measure environmental profit and loss is a great coup for the company but this is more than just good PR. CEO Jochen Zeitz made it clear when launching these figures that he is serious about sustainability:

The business implications of failing to address nature in decision-making is clear – since ecosystem services are vital to the performance of most companies, integrating the true cost for these services in the future could have significant impacts on corporate bottom lines.

For those of us working in the field of social innovation, this is nothing new. But it’s promising to hear such explicit recognition by a corporate global leader that the fate of his company and the rest of industry is inextricably tied in to that of the Earth and its resources.
This week, the Hub hosted a game called Perspectivity that teaches the social dynamics of sustainability and brings to the forefront the game-shift required by business and governments if we are to tackle climate change.
Each round, we had to decide how to allocate funds for building roads and power stations and were told that the winner would be assessed solely on the amount of revenue made by the end of the game.
The catch was that if there were more than a certain number of “dirty” power stations on the board at the end of each round, a natural disaster (or several) would be unleashed, causing random destruction to the infrastructure in which we’d invested. The idea was that we should be encouraged to make pacts among the players to upgrade our power stations to more expensive, but no more lucrative, clean-energy power stations to avert environmental disaster.
Surprisingly, for a group made up primarily of environmentalists and social entrepreneurs, individualist strategies and reckless risk-taking ruled the day. In the reluctance to reduce our potential revenue, we laid ourselves bare to a chain of natural disasters of biblical proportions.
The speed and ease with which selfish unilateralist tactics took over when profit was the sole measure of success was unnerving to say the least, and helped us to understand the psychology of global businesses motivated by the single bottom line. Despite the fact that unsustainable development put us personally at risk in the long term, it was difficult to appreciate the less tangible benefits of building green.
Puma, and its parent company, the PPR Group, which also owns fashion brands such as Gucci, say that these measurements of environmental profit and loss are just the first stage of the journey for them. The organisation says it plans to measure further environmental impacts such as acid rain and waste, and social impacts such as working conditions and fair wages.
Now Puma has pioneered this approach, hopefully others will be keen to follow suit and perhaps even, in the spirit of business competitiveness, to go a step further.
Commodifying the environment in this way may seem distasteful for some in the environmental movement, but it could represent the best opportunity for creating meaningful change in how businesses operate.
It seems this game of environmental Monopoly has taken a new turn, the rules have been re-written, and perhaps we could all, in the future, be the winners.
Anna is a host at the Hub Islington