Cycling Commissioner for London Andrew Gilligan arrived in true style at last Tuesday’s HUB Eco Series event on London’s new cycling plans, having sped (by bike) across town from a late-running Westminster meeting only to climb our four flights of stairs to the HUB Islington loft-studio.

He was warmly greeted by his fellow speakers, motoring journalist and Pistonheads Editor Dan Trent and cycling blogger and author Julian Sayarer, plus 50+ guests from the cycling fraternity, poised to hear more about the ambitious new Mayor’s vision for cycling in London he’s been tasked with implementing.

The great thing about us cyclists is that, no matter age or creed, we are all evangelical about cycling; it’s far more than a mode of transport to us, its a proud lifestyle, as demonstrated by this short video in which HUB Islington members discuss why their love for cycling in London.

Within minutes, it became obvious that Andrew Gilligan is not simply a journalist turned civil servant, tenuously tasked with building more bike lanes; he himself is a full blooded and established member of the London cycling fraternity, who takes the same risks as everyone else on London’s roads, commuting daily by bike to and from his home in Greenwich as he’s ‘never in his life’ owned a car. This does give the guy credibility. 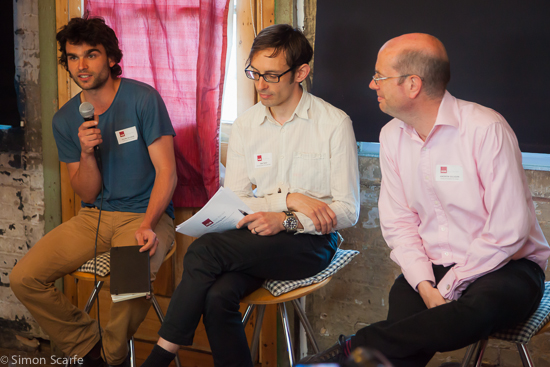 Gilligan was keen to talk about the ambitious new cycling plans for London, which would total nearly £1billion investment, noting ‘’We have done a little now, and much, more will follow in the next few years’…the plan is to de-Lycrafy cycling in London, creating better places to cycle, less congestion and ultimately a cleaner city’. He was quick to manage expectations, adding”Its not going to be perfect…This isn’t Amsterdam, only 2% of Londoners cycle regularly, but our goal is to change this steadily and properly.’

He went on to explain that the main challenge to the plans isthat TFL only owns 5% of London’s roads, which will require him and his team to work very closely with local boroughs who control those roads needed for ‘quiet ways’; so far apparently the response has been positive. Gilligan appealed for help from the audience and the public, asking them to contact him about non cycle friendly developments happening in their boroughs as it is possible for these to slip off the busy GLA radar, and cited the recent redevelopment plans of the Heygate Estate in Southwark, which Boris Johnson had to intervene with at a late stage to insist on better cycling considerations. 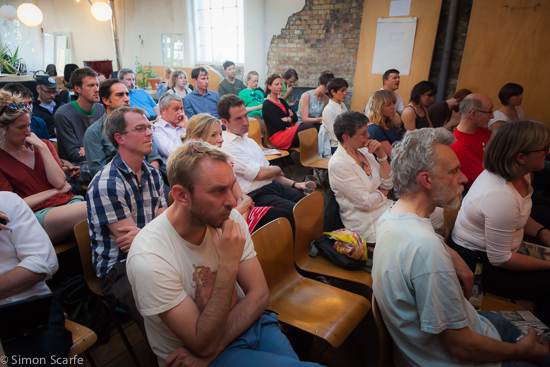 Gilligan announced several new developments of interest to the local cycling community, including upcoming 20 mph zones in Camberwell & New Cross, the lifting of the ban on bikes on the DLR last week and plans for a huge new cycling hub in the Waterloo station area. In terms of the Barclay Bikes hire scheme, the GLA are exploring options of private docking stations in basement of city banks to resolve the docking station space squeeze, and the introduction of contactless payment for the Boris Bikes from next year onwards.

Questions flowed throughout the 40 minute Q&A session, via the live audience and buzzing Twitter feed, and there were ample hands in the air when we reluctantly drew the evening’s animated session to a close at 8.30pm. Fortunately the audience and speakers were able to continue their cycling discussions over drinks afterwards in the HUB loft space, which is exactly what we love to see at Hub Eco Series, and we finally closed up show at 9.30pm.

Thank you
We’d like to thank everyone for coming; the speakers for taking time out of their busy schedules to talk to us, HUB Islington for their generous support for this events series, Simon Scarfe for his excellent event photography and the website Stolen-Bikes.co.uk for their generous sponsorship of our concessions tickets. Don’t forget to sign theE-Petitionasking the Government to promote cycling by implementing the recommendations in the ‘Get Britain Cycling’ report.

NEXT EVENT: The Burning Question – Why are we failing to tackle Climate Change?
The next HUB Eco Series event will take place on Tuesday 25th June and features an evening of conversation about the new book The Burning Question with author Duncan Clark, facilitated by Andy Hix of Hix Media. Buy your £5.00 HUB Member ticket here.